Listen Here to the recording on our YouTube Channel 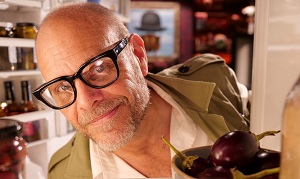 Alton Brown was directing TV commercials when he got the crazy idea to go to culinary school and reinvent the cooking show. The result: Good Eats, an irreverent, science-forward program that kept Brown gainfully employed for more than twenty years. Along the way he also hosted Iron Chef America, and Cutthroat Kitchen. Currently, Brown’s live culinary variety show Beyond the Eats continues to play to sold-out theaters across the country, and his recently released ninth book, Good Eats: The Final Years is not only a New York Time’s Best Seller, but also quite heavy. Brown has garnered two James Beard awards and a Peabody. He lives with his wife, the designer Elizabeth Ingram-Brown, and their two dogs in Atlanta. 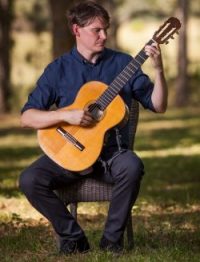 Philip Snyder is a classical guitarist, cellist, and founding member of two critically acclaimed chamber music ensembles, the Georgia Guitar Quartet and Revien.   He studied with renowned guitar pedagogue John Sutherland and cellist David Starkweather, and earned a Doctorate in Guitar Performance and a Master’s in Cello Performance from the University of Georgia.

Philip’s arrangements for the Georgia Guitar Quartet and Revien include music by Arvo Pärt, Chopin, Bach, Vivaldi, Brahms, Grieg, Milhaud, Fauré, Debussy, Mendelssohn, and Ginastera.  He has also composed several pieces for both ensembles.  His performances with these groups are often featured on National Public Radio’s Performance Today, which reaches a weekly audience of over one million listeners.  Dr. Snyder serves on faculty at the University of North Georgia.

This popular short work of 1956 provides a fine snapshot of Bernstein during the astonishingly productive second decade of his career as a composer. Its original purpose was to be the curtain raiser for the stage work Candide, based very loosely on Voltaire’s 18th-century satirical novella of the same name. If the ill-fated stage work itself went through multiple changes in genre (from play with music, to operetta, to musical, to concert work), length, libretto, and performance requirements, the overture quickly earned a place in the orchestral repertoire and became the most-performed work by Bernstein.

Like other celebrated scores by Bernstein, the overture fuses together traditional techniques of form and texture with an array of old and new melodic idioms. For its form, Bernstein relied on a condensed version of the exposition-development-recapitulation sonata, a form more typical of Mozart than musicals.  Within this framework, he follows tradition by introducing important melodies to which words will be added later.

First to come are themes from the first act’s battle music, which get things rolling at a frenetic pace. After a flashy transition of woodwind solos, the pace slows for the ballad-like “Oh, Happy We,” played by lower strings and woodwinds. In the overture’s second half, an instrumental version of the coloratura showstopper “Glitter and Be Gay” turns up, introduced by flute and followed by a raucous overlapping multi-voiced “stretto” of the tune, featuring winds, brass, and strings. The work closes with a potpourri of the now familiar tunes, jockeying for one last appearance before the final cadence brings everything to a halt.

Thomas Sleeper is an American composer, conductor, and bass trombonist. From 1980 to 1993, he was the orchestra director at Stetson University; from 1993 until 2018 he served on the faculty at the University of Miami, conducting its orchestra and teaching conducting students. This did not prevent him for composing a large number of works, including five symphonies, over a dozen concertos, as well as numerous works for orchestra and various chamber ensembles.

Each of the four movements collected in his Second Children’s Suite originated as a stand-alone piece dedicated to a family member or relative.  The Lullaby is the Suite’s second movement and was a Secret Santa gift to the daughter of his sister-in-law, a visual artist. Its first half begins with a haunting melody in the oboe, accompanied by strings. For the second half, various phrases from it are developed in a richer orchestral texture. These melodic echoes take the music to an emotional peak before subsiding, thereby allowing the oboe to lead the work to a soft closing.

North Carolinian Harold Schiffman, a student of Roger Sessions, taught for nearly a quarter century at Florida State University, before retiring in 1983. As a composer, he contributed to every large and small genre of classical music. He is especially admired for a string of compositions that showcase the talents of instrumental and vocal soloists.

Variations on “Branchwater” (1987) for guitar and orchestra takes its name, not from any authentic Appalachian folk song, but from the composer’s own melody. In a note addressed to non-Southerners, Schiffman explained that “branch water” refers to creek water, a necessary ingredient in an evening’s “bourbon and branch.” The work opens with solo guitar playing the theme. As with certain other Schiffman compositions, this “original” melody hints slyly at a well-known tune composed by someone else. The seven variations and finale that follow keep the guitar prominent, thanks to deft neoclassical orchestration. Meanwhile, changes in tempo and style keep things interesting. With Variation VI a quicker pace and “spoiler” syncopations set the stage for the theme’s melodic cousin to be revealed. (Hint: be thinking about rock super groups of the 1960s.)  A tranquillo variation and a guitar cadenza appear thereafter, followed by an appropriately fast finale in triple meter to end the work.

Born into a musical family in the musically rich and diverse northwestern Mexican state of Sonora, Arturo Márquez has built a productive career from making fusions out of previously discrete musical styles and genres. The popularity of today’s work owes much to the efforts of Venezuelan conductor Gustavo Dudamel, now the music director of the L. A. Philharmonic. Together with the remarkable young musicians of the Orquesta Sinfónica Simón Bolívar de Venezuela, Dudamel brought the work to many of the world’s major symphonic halls.

Danzón No. 2 is rooted in the popular ballroom dance called danzón, which came to Mexico from Cuba. The work’s germinal dance melody is introduced first by a soulful solo clarinet at a soft dynamic. In each of the work’s two halves, that simple melody launches a process building toward ever higher levels of dynamic level, tempo, rhythmic complexity, and raw energy. Along the way, various string, woodwind, brass, and keyboard players trade solos, much like their counterparts in a Mexican dance band.  Thanks to the composer’s gifts as composer and orchestrator, traditional Latin dance idioms are transformed into a truly symphonic experience.

Prokofiev’s Peter and the Wolf is the world’s most beloved and celebrated narrative in music, even though it is neither an opera, nor a ballet, a programmatic symphony, or soundtrack. In 1936, just after his return to the Soviet Union, Prokofiev accepted a commission from Natalia Sats, director of the Moscow Children’s Theater, to compose a musical symphony for children. Instead, Prokofiev negotiated for the chance to compose a musical narrative work for speaker and instruments, whose hero Peter would embody the virtues of a young Soviet Pioneer. After rejecting someone else’s rhymed script, Prokofiev wrote the original text himself, specifying that the “leitmotiv” for each character should be introduced to the children in advance.

While those introductions to the instruments and the text make it clear to everyone what is happening and who is involved at every moment, the true magic of the piece lies in Prokofiev’s marvelous music. For indeed, the whole point of the work was to show that music, too, can tell a tale. Peter’s happy walking tune in the violins introduces the young boy and acquaints us with his unfailing optimism. The bird’s dazzling flute pyrotechnics are much more than a birdcall: they help us to imagine a bird in flight. In a similar fashion, the music for the duck, cat, the grandparent, and later on the hunters gives us impressions of their character, gait, and mannerisms. And finally, we have the wolf. For all of us who remember the work from childhood (perhaps from Walt Disney’s animated version of 1946), the sudden appearance of those three horns playing a menacing chromatic tune will forever trigger an instinctive fear.

With all of the themes in place, Prokofiev can stage their encounters and interactions with each other. Beyond this, he uses music to depict the emotion of the moment, for example, when cat chases bird, when the wolf first appears, when Peter plans how to capture him, and also to portray the events pertaining to the duck’s personal saga.  In this way, Prokofiev’s music, together with Prokofiev’s words (often modified and updated), brings his symphonic tale to life.